James Conca, who understands molten salt reactors, is linking nuclear power as beneficial to wind power, a good mental strategy for making nuclear power sound beneficial. Maybe some wind people will even think “but if we have a small nuclear power plant able to supply the same power as this huge wind farm, maybe we don’t need to pay for the wind farm”… and let’s let them think that for themselves. “Nuclear can help wind” is good for now.

Good chart on how much wind power is supplied vs demand, throughout one day at the Horse Butte Wind Farm, and how much an SMR would supply to equal demand. 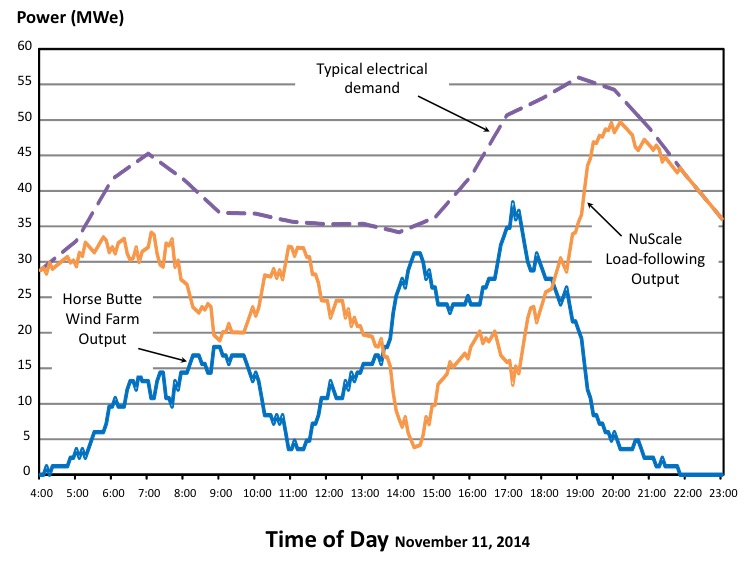 Commenters mention another IEER “mis-fact” sheet, http://ieer.org/resource/factsheets/small-modular-reactors-solution/ which doesn’t understand that if you have different pressure and temperature, you have different risk, which can have different risk management systems, and still provide even better safety. They do cost arguments as if SMR used the same construction and materials as LWR but several times.

Here are my response to some of the commenters:

Erica Gray:
Oh boy, Mr. Conca is always at it. The truth of the matter is these “small” unproven reactors have HUGE costs and don’t negate the waste issue.

Just would be more wasted money and time, that would take away from implementing renewables.

@Erica Gray: IEER is famous for inaccuracies and bias; they don’t think through designing a system, they just think of something to say to make it sound bad.

Light Water Reactors use the highest water pressure the steel can handle, to generate as much power as possible. Small Modular Reactors that are based on LWR (such as NuScale) can operate at lower temperatures, therefore much lower pressure, simplifying safety systems. IEER doesn’t consider that. SMR based on Pebble Bed Reactors use super-strong pebbles to contain radioactive materials, at the highest temperature and pressure the reactor fuel and fission products could produce; the “steam containment building” an LWR needs wouldn’t be necessary for PBR. (IEER doesn’t think of that, either.)

IEER didn’t work out what safety systems would be needed for any SMR design, they just worked out the “implications of installing many reactor modules in a phased manner at one site” as if the technologies and construction methods were identical, though nobody is talking about building “smaller” Light Water Reactors!

When designing any energy system, you need to design safety systems that match the actual system risks, not LWR risks, right?

If you’re going to “implement renewables” without using modern safe designs of nuclear power to provide base load power, what are you going to use instead? Coal? Natural Gas? (How much methane gets released fracking for NG? Far worse greenhouse gas than CO2.) That wind farm got above 30% of “nameplate” power only between 2pm and 7pm that day, got above 50% about 1 hour. When is the wind power lowest? At night, so solar is out. “Ooh, I know! How much wave power can you get in Idaho?” Oh, none? Darn…

Nobody is going to propose a reactor that has costs approaching LWR, per kWH. And the SMRs being considered cost less than the energy storage systems and long-distance energy transmission systems needed to have those “low renewable prices” without base load power.

For safety, and also “negating the waste issue”, I prefer Molten Salt Reactors, which use over 99% of the fuel, instead of the <3% LWR uses. Atmospheric pressure, and the fission products chemically bound to the salt coolant so they can’t spread even if the underground MSR were hit by a missile.

We’ve had 60 years or so to figure out how to make nuclear affordable and we simply haven’t been able to bring the price down. The price keeps going up.

Go back to the drawing board. Invent the GenV, GenVI, GenVII, whatever that brings the breakthrough. Until then why waste money?

Bob, we haven’t even built commercial GenIV reactors, though we have operated test reactors successfully. (US Congress approves nuclear reactor designs, guess who they ask about energy systems they don’t understand? How much money do they get from the coal and oil companies?)

We have not been trying to “figure out how to make nuclear affordable”, we only use Light Water Reactors. The Atomic Energy Commission, top nuclear physicists and nuclear reactor designers said we should stop using LWR in the early 1960s; Congress ignored them.

The safety issues and expense of LWR are from using water as coolant. Small modular variants of LWR can use less pressure (from lower temperature), which will make them less expensive to build and will require simpler safety systems.

GenIV reactors such as Molten Salt Reactors, including LFTR will have much better safety and fuel use, and lower cost than LWR.

A NuScale 12 module plant providing 574 MWe will cost $2.5billion, operate for 60 yrs with fuel costs of 1.4c/kWh, and O&M costs of 2.3c/kWh at a capacity factor of 85%, comes out to 4.6c/kWh lifecycle actual costs. This does not include non-production costs like financing, or taxes, just actual costs. When comparing among sources, you have to normalize to everything, especially lifespan. For hydro, it’s 2.7c/kWh, for coal it’s 5.1c/kWh, gas 5.0c/kWh, [wind?] 7.5c/kWh and solar 8.5c/kWh. These last two will come down over the next decade, but to run for 60 years you have to build more. Since construction costs are so important to nuclear and renewables, the 60 to 80 year life of nuclear drops the lifecycle costs significantly.

I still prefer MSR, especially since they eliminate the safety systems based on LWR or NuScale used of water.

LWR has had rising costs. That is not inherent with nuclear power, but with large water-cooled nuclear reactor designs. The safety problems of LWR are from high-pressure water; the expense of LWR is from high-pressure pipes and the steam containment building.

Other types of nuclear power don’t use water for coolant. Molten Salt Reactors operate at atmospheric pressure, use no water, and most designs use over 99% of the fuel.

…I am simply not willing to assume there will ever be cheaper nuclear energy until it is demonstrated.

As for lifetime cost, new wind turbines are being built for 40 to 50 year lifespans. Less than 4c/kWh (unsubsidized) for the first 20 years and 1c/kWh operating costs for the next 20 to 30 years. Thats ~2.5c/kWh lifespan.

PV solar, we simply do not know how long solar panels will last. Our oldest installed array is now nearing 40 years old. At age 35 it had lost about 0.1% per year. At 50 is should be producing 95% of new. How many years past 40 will it keep cooking? We won’t know until it stops.

Solar should soon be under 5c/kWh during the 20 year payoff. After that operating costs < 1c/kWh. 40 years would be 3c/kWh.

Those prices for wind and solar are “all in” prices. They are contract sales prices, PPA. They include all costs including owner profits.

When someone builds a reactor that can compete with 2.5c to 3c/kWh wind and solar we can talk…

That is not “all in” cost of wind or solar. The entire article talks about the need for some base load power to back up wind. Solar has the same problem. Those costs you give might be accurate for “additional power” when the wind is blowing or the sun is shining; those are not complete costs for wind and solar to power a city without some base load power source (such as coal, natural gas, or nuclear).

This site uses Akismet to reduce spam. Learn how your comment data is processed.