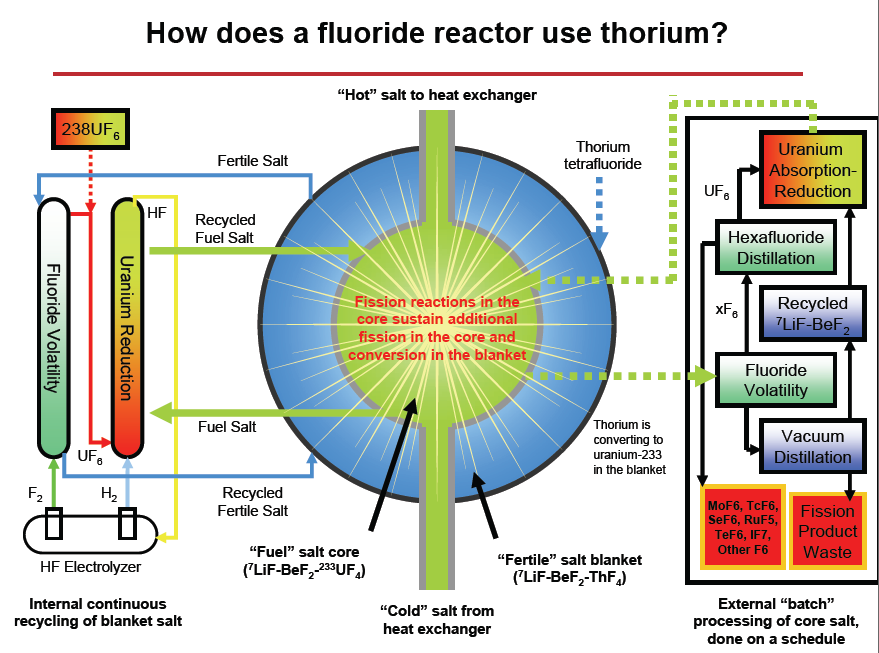 What is a Molten Salt Reactor? It is a completely different nuclear reactor than we have been using, with molten fuel cooled by stable salts. (We’ve been mainly using the Light Water Reactor, LWR, with solid fuel in pellets cooled by high-pressure water.)

A Liquid Fluoride Thorium Reactor (LFTR) is a type of Molten Salt Reactor (MSR) that can use inexpensive Thorium for fuel (thorium becomes uranium inside the reactor).

A slightly different type of MSR can consume the uranium/plutonium waste from solid-fueled reactors as fuel.

We know Molten Salt Reactors work since we built and operated one — decades ago!

Image “How Does a Fluoride Reactor Use Thorium” is from PDF Kirk Sorensen – Thorium Energy Alliance.

LWR uses ~2% of the fuel, because fission products trapped in the fuel pellets block fission, and the pellets get damaged by radiation and pressure. The rest of the uranium is considered “waste”, to be stored for over 100,000 years. Well, that is waste only if we only use LWR, or similar solid-fueled types of nuclear reactors. There are several types of nuclear reactor possible, that can fission All that uranium, plutonium, and other transuranic elements. (God didn’t make “useful uranium” and “defective uranium”; it’s the reactor design of LWR that only uses ~2% of the fuel, and that is after enrichment.)

MSR has molten fuel, no fuel pellets, no fuel rods. Some of the fission products, those that block fission the most, are gasses — in LWR they are carefully trapped in the pellets, in MSR they bubble right out of the fuel salt and are collected. Most other fission products are easily chemically separated from the circulating fuel salt. Most MSR designs, including LFTR, use over 99% of the fuel.

A MSR’s waste is safe (radiation levels below the original uranium ore and below background radiation) within 350 years. To produce 1 gigawatt electricity for a year, takes 800kg to 1000kg of thorium or uranium/plutonium “waste”. 83% of the fission byproducts are safe in 10 years, 17% (135 kg, 300 lbs) within 350 years, with no uranium or plutonium left as waste. After that, radiation is below background radiation levels. (Compare that 1000kg with 135kg for 350 years, to 250,000kg uranium to make 35,000kg enriched uranium for a solid-fueled reactor like LWR, for that same gigawatt-year electricity, all needing storage for 100,000+ years.)

No uranium, plutonium, or other long-term elements in LFTR or any MSR waste, since they are simply left in the reactor until they either fission or decay to short-term waste. (Standard industrial processing inefficiency of 0.1% leaves 1kg uranium; we can do better than that, but still much less per gigawatt-year than the 5500 kg uranium left in an open ash pile from an average USA coal plant!)

Most of the fission products are valuable for industrial use. After a few years, radioactive decay brings them below background radiation, ready for use. For example, several rare earth metals, used for consumer electronics, are fission products. (As a bonus, the rare earth materials we currently mine are almost always found with thorium, which is currently considered a “nuclear waste” though it has one of the lowest levels of radiation of any radioactive material, radiation stopped by a thin layer of plastic or paper; when we use MSR we mine a little less rare earth materials and leave a little less thorium “waste”.)

Instead of thorium, a Molten Salt Reactor can use uranium-235 or plutonium waste, from LWR and other reactors. (Fast-spectrum molten salt reactors (FS-MSR) can use all isotopes of uranium, not just the 0.7% U-235 in natural uranium — with all the safety and stability of MSR.) 800kg of nuclear waste would work in the same reactor instead of 800kg thorium, with about the same fission byproducts, and the same electrical output. Convert 800kg to be stored for 100,000+ years, into 135kg to store for 350 years and 665kg for 10 years. No “PUREX reprocessing” needed, simply extract the uranium and plutonium (including fission products) from the fuel rod, and put it in a MSR. (In a MSR designed to use a different salt than LFTR would use, the zirconium cladding of a fuel rod could even be used to make the salt coolant.)

Since no MSR uses water for cooling, there is no storage of water containing radioactive materials, and no concern of stored radioactive water leaking. (MSR can transfer heat to existing equipment such as steam generators, for example replacing the boiler at a coal plant, but doesn’t use water anywhere in the reactor.) Instead of using water, MSR could produce heat to efficiently desalinate water for drinking or farming.

LFTRs could even be deployed for military field use or disaster relief. Imagine a few standard “18-wheeler” shipping containers brought in after 2017 Hurricane Harvey and Hurricane Maria, or 2018 Typhoon Mangkhut, providing 100MW electricity and desalinating water.

In addition to delivering carbon-free electricity, LFTRs high temperature output can desalinate water (which we need in some areas even more than electricity, and we will need more as the world population grows).

LFTRs also can generate carbon-neutral vehicle fuels, from water and carbon dioxide (from the atmosphere or ocean or large CO2 sources such as coal plants). The high heat of a LFTR (over twice what a LWR can generate) can split CO2 and split water, so making gasoline will be affordable.

Molten Salt Reactors can be designed to output wide ranges of heat, for different industrial processes. They all automatically follow the load, meaning that if less heat is used there is less fission producing heat.

Reducing CO2 in the Oceans

Carbon dioxide in the air enters the oceans, making acid. The acid is already killing plankton and other ocean life: the carbonic acid dissolves their “shells”. Researchers are exploring methods of using MSR heat to extract CO2 from solid materials containing a lot of CO2, store the carbon and release or use the oxygen, and then we could put those CO2-absorbing materials into the ocean to remove CO2 from the water. (Storing CO2 in a solid would work; storing compressed CO2 underground has a huge risk of leaks that would suffocate life on the surface.)

MSRs are less expensive and more environmentally friendly than other sources of base-load power or grid power storage, needed to supplement wind and/or solar power.

The total cost of developing MSR technology and building assembly line production (like assembly line production of aircraft or ships, with better safety standards than is achievable with on-site construction, at much lower cost) will be much less than the $10-$12 Billion for a single new solid-fueled water-cooled reactor or single nuclear waste disposal plant. With sufficient R&D funding (around US $1 billion), five years to commercialization is entirely realistic (including construction of factories, less than US $5 Billion), and another five years for a national roll-out is feasible. (Unfortunately, the U.S. Nuclear Regulatory Commission says they will start writing licensing and regulations in 30 years.)

What is a Liquid Fluoride Thorium Reactor?

Thorium Converts to Uranium Inside the Reactor

No Chance of Nuclear Meltdown

No Water Needed for LFTRs, and no Loss of Coolant Accidents

Heat for Industrial Use

Manufacturing LFTRs Easier than Other Reactors

Need to communicate your complex information clearly? Contact Me.